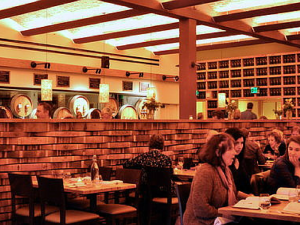 Napa Valley is full of many extraordinary places to wine and dine. We love showing our guests the best of the best when it comes to pleasures of the palate. We also love our guests to be well entertained. When you can combine those, you are left with an unforgettable experience. City Winery Napa, located in the heart of Downtown Napa on the banks of the Napa River creates a full calendar of fun music, comedy and movie events giving guests and locals alike a roster of can’t miss events. 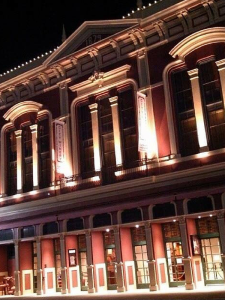 City Winery Napa pairs the culinary experience with a cultural experience. Creating the perfect setting to share with friends your passion for wine, music and great food. From the moment you walk in the door your senses are indulged. From the sounds, smells, tastes, and views combining to create a unique and special customer experience. They’ve created a cuisine that borrows from Mediterranean history – Italian, French, Spanish, Middle-Eastern cultures have been pairing simple and wholesome food with wine for centuries. With this in mind, large plates are created to pair with your wine and share with your companion. Their award-winning wine list has over 400 unique producers from around the world, in addition to the more than 20 house produced wines sourced from vineyards in California, Oregon, Washington, Argentina and Chile.

Whether you’re stopping by for one of their great happy hours, trivia night or Vintner Vinyl nights the restaurant is a great place to spend an evening. Just off Main Street in downtown Napa, the 75 seat eatery includes a back-yard patio, and wine bar with 35 wines on tap. Whether you want to chat with the bartenders about their recommendations or have a private table, it’s an ambient and cozy atmosphere. 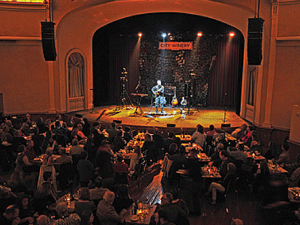 Dinner and a show? City Winery always has seating in the music venue available up to two hours before a performance. For the best dining experience we recommend arriving a bit before the show. Beau Wine Tours offers VIP dinner service from your hotel to City Winery Napa. Enjoy round trip ride, sunset views and champagne service. All with the peace of mind that you’ll arrive in safety, style and comfort!

June’s calendar is full music and events to satisfy many tastes. Check out the full calendar here: http://www.citywinery.com/napa/tickets.html/

We have highlighted some of the can’t miss entertainers coming this month.

Guitar virtuoso Robben Ford’s new album Into The Sun shines a bright light on his artful, contemporary songwriting and the stunning playing that’s made him a favorite foil of Miles Davis, Joni Mitchell, George Harrison and other legends. ! The five-time Grammy nominee describes the 11-song set as “one of the top recordings I’ve ever done” — a staggering observation considering his extensive discography, which embraces more than 35 albums under his own name and with his various bands.

Hot Rize, was something special.  And by the time they bowed off the stage as a full-time act in 1990, they’d not only climbed to the top of that world as the International Bluegrass Music Association’s very first Entertainers of the Year, but their stature was recognized across the board, with a nomination for a then-new bluegrass Grammy, a four-star album review in Rolling Stone and tours across four continents. Steeped in bluegrass tradition through long hours on the road spent listening to the genre’s giants Hot Rize’s music was and is equally informed by a taste for the music of Leadbelly and Freddie King, swing, old-time Appalachia and more in ways that mirror the broad sweep of Bill Monroe’s influences.  And while their respect for tradition was easy to hear (and, thanks to their suits and vintage neckties, easy to see), the fresh elements they brought were enough to earn them the suspicion of some audience members—and the devotion of many more.

“Marty was the one who started the San Francisco scene”, says Bill Thompson, Balin’s roommate back in the mid-’60s and former manager of both the Jefferson Airplane and Jefferson Starship. The Jefferson Airplane, initially a folk-rock venture, came to epitomize the psychedelic scene, scoring a gold record with their 1967 second album, Surrealistic Pillow. Balin’s soulful tenor proved a pivotal element of their sound. He also wrote key compositions including “It’s No Secret” “Today,” “Comin’ Back To Me” “Plastic Fantastic Lover” “Share a Little Joke,” and “Volunteers.” Today Balin tours as a Trio consisting of himself, Chuck Morrongiello on guitar and Lloyd Goldstein on Bass.  Balin will be celebrating the 50th Anniversary of the Jefferson Airplane with the release of a new double album called GOOD MEMORIES.  The greatest hits of Airplane through the Starships hits.

Variations in Blue, from Swing to Soul: The Bey Paule Band, eight pieces of soul-blues musical genius, has been mesmerizing West Coast audiences since 2011. Two CDs released in 2013, You Don’t Know Nothing and Soul For Your Blues, earned the band two Blues Music Award nominations, and a jaw dropping, show-stopping performance at the prestigious awards ceremony. All this well-deserved attention paved the way for two International tours during the summer of 2014. Summer 2015 brings their third release on Blue Dot Records, Not Goin’ Away, and another European tour, followed by the WOMAD festival in the Canary Islands. Frank Bey’s hypnotic vocals and Anthony Paule’s lofty guitar playing, keep their band on a shelf all by itself. However, if comparisons need to be made, they would be likened to Bobby Bland, B.B. King, Ray Charles, and Otis Redding.